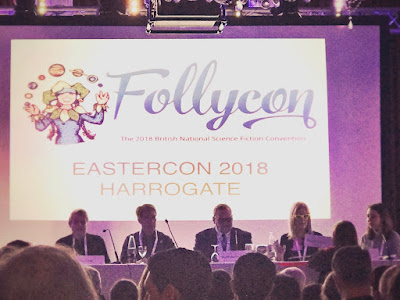 It has occurred to me recently that my cat has been overtaking my Blog somewhat. With my consent, it has to be said. But even so, the real Guy T. Martland is being somewhat diluted behind his furry façade. Writing this blog post is my attempt to wrest back some degree of control from the sharpened claws of my significant alter ego. The Cat has made it clear what he got up to at Eastercon, but I haven’t. So here’s my bit.

To tell you the truth, I always find cons a bit difficult. The first one I went to I felt terribly alone and miserable for about a day, until I finally found someone I knew. And whilst things have moved on for me since then, I still suffer a degree of apprehension about attending. Being 6 foot 8 and having what some people might term a posh voice can make things somewhat difficult socially. I’m immediately shoved into the generic public school boy ‘rugger bugger’ category. Which, as those who know me, is really quite far from the truth. In addition, my height often belies my confidence at such events. I’m really not much of a social animal: I spend most of my life locked away in a lab looking at slides for goodness’ sake! Talking to loads of people at once can thus come as a bit of a shock.

There are a number of things that have helped with cons. Firstly, the Milford thing. This has been an absolute godsend when it comes to Eastercon and the like. Knowing that con stalwarts such as Jacey Beford will be there to support you and introduce you to other writers is wonderful. So, thank you Milford! And also, the friendships have blossomed from Milford course themselves. In fact my old pal Philip A. Suggars’ attendance was one of the deciding factors in making the long trip up from the South Coast to the darkest trappings of the North. Also, my wife seems to love these things as well, and has made pals with some of the Milford lot. Even so, I tend to stay at cons only a few days, finding a whole weekend just a bit too much. But that could be because of the quantities of real ale consumed... 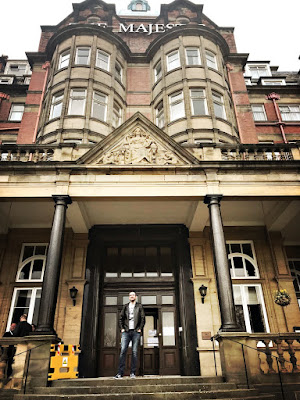 I wasn’t on any panels or reading, like last year. Just happy to be there, hanging around, soaking up the rarefied atmosphere and feeling like a proper writer for a while. There were a number of fine moments this year, which I’d like to share with you. Of course, every con has magical moments, but these ten stuck out for me in particular. 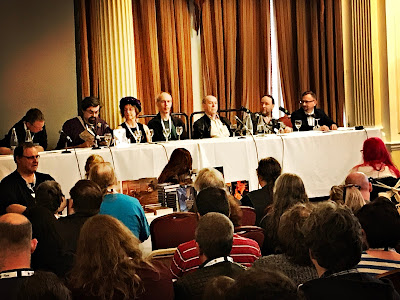 1)    Attending the NewCon press book launch, including the best of British SF 2017 book launch. Seeing Mr Philip A. Suggars in his pomp, soaking it all up behind the writers’ desk on the stage, was fabulous. And I managed to get hold of a copy of Liz Williams’ Winterstrike sequel, for which I’ve been waiting a long time.
2)    A very drunken Adrian Tchaikovsky telling me how much he’d enjoyed my band. Until he realised I wasn’t Jon Boden. And that in fact the only thing I had in common with former Bellowhead chanteur was a leather jacket. And a ridiculously handsome face.
3)    Simon Morden asking me if Dominic Dulley was my significant other. As much as Mr Dulley is a fine looking chap, he really isn't my type - thankfully, this slightly awkward situation was soon resolved. I reminisced with Simon about the Noesis days, when we shared space in the short-lived magazine. I think Dom, as a newbie author, seemed pleased to have some advice from the seasoned Morden. Incidentally, Dom’s debut ‘Shattermoon’ comes out next month on the Jo Fletcher books’ imprint and it is fabulous.
4)    Listening to Kim ‘Stan’ Stanley Robinson’s recollections about his mate Iain Banks. Until this point, I hadn’t realised they were such good pals.  Stan recounted a visit to Iain’s house in Queensferry, South Scotland. ‘Where shall we go to lunch?’ asked Stan. ‘The Hebrides,’ Iain replied. And so it was, the meandering roads of Scotland providing no match for Banks’ lightning reflexes behind the wheel of his Porsche. And when it came for Stan to fly back, realising that he’d got the wrong airport, Iain simply replied: ‘Good’. Because this meant he’d have the opportunity to put his foot down and break the speed limit. Stan made his flight. 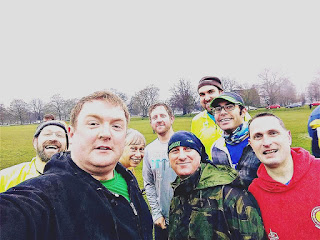 5)     Running the Harrogate ParkRun, with Simon Morden and one of the guests of honour Christina Lake. Well, I say running with them, but the leisurely run around The Stray descended into a full on endurance fest, when it became apparent that half the course was just a muddy bog. People were losing shoes in the mire, others were just giving up. I persevered, completed the course, and returned to the hotel with mud up to my waist.
6)    Getting Jeff Noon’s new novel signed. He tried to nick my pen because it was a Black Muji 0.5mm tip. By way of explanation, he told me that he also wrote with those pens, hence why he’d tried to lift mine. He then accused me of buying them all up which is why there were never any left when he went shopping. Perhaps this explains the Noonisms that appear in my prose when I jot in my notebooks with these implements.
7)    Catching up with Marcus Gipps who revealed that there were a few old unpublished J. P. Martin novels which he was thinking of kickstarting. When asked what I was writing, I said something like: ‘been writing these cat stories.’ And didn’t really elaborate much further. Really selling myself there to one of Gollancz’s prime editors, I reflected later...
8)    Seeing Peter F. Hamilton and Kim ‘Stan’ Stanley Robinson hugging each other in the bar. Settling old grievances? Rekindling their bromance? Or just happy to see one another?
9)    Going for dinner with the most excellent Carl Allery, who has been missing in action the last few Eastercons. Lovely to see him again. And we went to the most splendid and ridiculously ostentatious curry house. 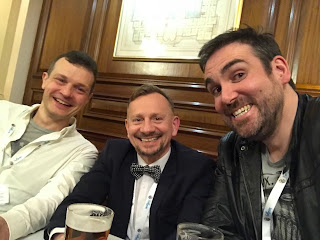 10)And of course, hanging in the bar with Philip A. Suggars, Dominic Dulley, the Morans, Sue Oke, Noel Chidwick, Tina Anghelatos, Jacey Bedford, Dave Allan, Matt Colborn and a whole bunch of other Milford folk.

I also believe The Cat was active over the weekend, posting all kind of nonsense. You can find it in the hijacked parts of this blog, I’m sure. 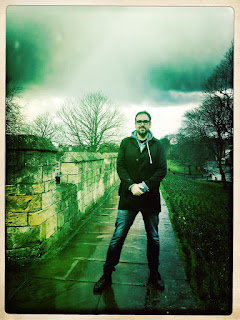 We stopped at York on the way back. Walking the walls, it struck me that York is very much George R. R. Martin’s Winterfell. Well, he’s admitted before that he nicked Hadrian’s wall for ‘The Wall’ in Westeros (England). In fact I heard this from the horses’s mouth at Worldcon a few years ago (the con referred to at the top of this piece). So York as Winterfell it isn’t such a stretch. Then we went to look at some trains, had some more beer and went home. 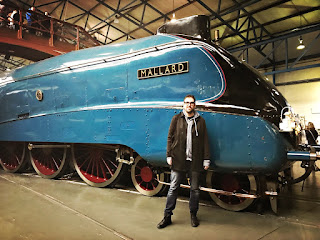 And that was Follycon, 2018.  Next year we return to the Ballardian landscape of Heathrow. Martland will be once again stuck on his Concrete Island. Actually, Balard’s protagonist was named Maitland. Close, but no driving off the M4 into a decrepit wasteland populated by nutters just yet.