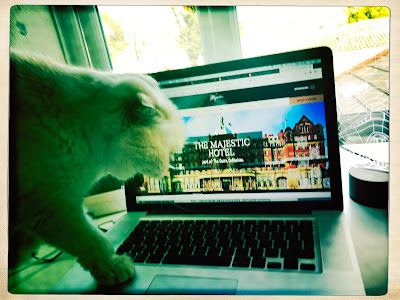 More words from The Cat, channelled by Guy T. Martland
(An EasterCon EasterEgg)


The Slaves were pretty quiet when they left this morning. I think, in fact, the small one was pretty much still asleep. I hope she wasn’t driving. I stayed where I was, curled up by the radiator, watching their progress out of the bedroom door with one half open eye.

I heard their car pull out of the drive. And then pull in again as one of them - I assume the tall, slightly anxious Slave - had forgotten something again. Once they had finally, definitively left, I settled back again, paws on top of tail. Thinking about how when I woke, I could knead the bedroom carpet and lick all the plastic bags I want without anyone to stop me.

Later on, as I’m leaving a series of tooth marks in the plastic coating of a vinyl record, which the tall Slave kindly left on the floor for me, I realise I’d better be heading off as well. The British Feline Science Fiction Association (BFSFA) annual convention is calling. So, I pad downstairs to the portal. All I have to do is step through, and I’m there. The odd thing being that it is in exactly the same place as the event my Slaves are attending: in The Majestic Hotel in Harrogate, Yorkshire. Or at least, mirroring parts of the metaverse. Funny, how things work out. It turns out it is sometimes easier for these events to coincide. Something to do with physics: anchoring points across the different realities we inhabit.

Of course, it is a lot easier for me to get back to Yorkshire than my Slaves. They would have had to contend with the dreaded bank holiday Easter weekend traffic, unseasonal weather and the dull monotony of motorway. I remember my first trip down to the South, years ago, the long way round. You see, my family live around here somewhere, but I was separated from them when I was a kitten. And then the small Slave ‘bought’ me. But the journey down South? Never again. And don’t get me started on Service Stations. What kind of living hell is that?

I wonder if I’ll see their shadows over the weekend. Perhaps not, because it looks like I’m going to be busy – I’ve got a few panels to speak on, a sahneklatsch – which is a sort of meeting where wannabe writers or fans can ask you questions, whilst drinking shots of cream. And of course, the Cat of Honour slot. Being CoH is something I’m now used to, though, so I’m not too worried about that. In some ways, I wish I was having a weekend like my tall Slave, just hanging around drinking with my writer friends. But then again, he will also be (somewhat desperately) attempting to schmooze editors or agents for the drivel he’s written and I don’t envy him that.

Not only that, but I might not see them because of our location. Yorkshire is full of ghosts and spirits. The metaverse is thick with them. Like clouds of cigarette smoke hanging in the air. I see them as I walk through the hotel atrium into the conference proper. But then my attention is diverted by Ziggy and a few other cats, and someone is buying me a pint of Holstein Friesian.

I manage to sit through the first panel without making a fool of myself. However, it was curtailed when a rumour started going around that the mice police were patrolling the hotel. The heavily militarised faction of the mouse population are not known for their compassion when it comes to our kind. And they don’t like big groups of us together. But it turned out this was just someone scaremongering.

Later, I’m sat at the bar with another pint. Surrounded by famous cats from the SF world: cats known by their human owners’ surnames as much as their pet names. Williams’ cat is there chatting to Lane’s and the Noon twins. The Noon twins are garbed in matching long yellow feathered coats, which makes them look like chickens with cat heads. I can’t remember one of their names, which is embarrassing. But the other is definitely called Desdemona. Over in a corner Beford’s cat Nimbus is chatting to Reynolds’, possibly imploring him to write another piece for her blog. Ziggy seems to have found his feet and has settled in, but keeps looking around at the assembled Caterati - I think he’s hoping to see Gaiman’s cat again. Although he probably hasn’t yet surfaced – it is only around eight PM, so a bit early for him.

Someone pats my paw and points: it’s Ziggy. ‘You see what I’m seeing?’ he asks. I follow his outstretched front leg, squinting to make out the shadows in the metaverse.

‘Our Slaves!’ I exclaim. They are both sitting together, drinking. In a similar fashion to the way Ziggy and I are, in fact.

‘Wonder what they are talking about,’ offers Ziggy.

‘Boring Slave stuff, I imagine,’ I reply. ‘Probably talking about their journey up here.’

‘Which route they took?’

‘Precisely. The roadworks on the A1M. Or the delays to the train.’

‘Perhaps they might see a flicker of a shadow which could, for instance, make them think of us. But their minds would dismiss that even before it entered their conscious thought,’ I reply. As I speak, I imagine that my knowledgeable pontificating is fulfilling the exact role expected of me by my younger colleague.

‘Shame. I’m going to try and biff mine in the face though,’ Ziggy replies, bounding off across the bar, narrowly avoiding knocking over someone’s drink. Oh, the enthusiasm of youth. I watch from afar as Ziggy pounces on his shadow human, who appears to notice something and reaches up to scratch his cheek, as if he has noticed a tickle. He soon tires of this game and comes bounding back, almost crashing into the Noon twins.

But I have also noticed something about one of my Slaves: the tall one. He seems weighed down, his spirit heavy. And I think I know why – a ghost seems to be following him around. It must have attached itself as soon as they arrived, the opportunist. I wonder what to do about this, and refuse the offer of more inebriants, while the party around me becomes more raucous. It isn’t long until a few of my fellow writers are swinging from one of the grand chandeliers in the centre of the room, and caterwauling, literally. I look around and my Slaves have left.