A Meeting With The Green-Gowned Devil 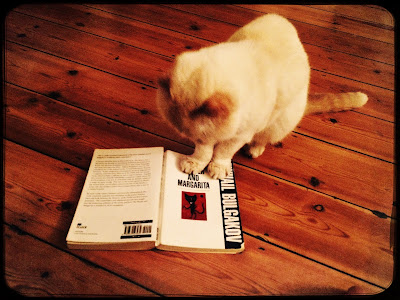 More words from the cat, channelled by Guy T Martland.


It goes without saying that today isn’t going to be a good day.  I prowl around the cat cage on the kitchen floor.  Which has been kindly left there by my Slaves, as if to prolong the agony.  I sniff it: it smells of spiders and damp.

It also reminds me of what happened.  The bad thing.  When the small Slave took me away and they did something to me which I still haven’t been able to quite forgive.  Let’s just say, they were there between my legs one moment, and then the next…  Well, I checked and checked again: they had definitely gone.  I’d known something was up, but at the time my abilities to change time or slip into other dimensions weren’t so finely honed.

Not that there is any great shame in being a eunuch in my world.  Most of my feline male peers have been similarly butchered by the green-gowned devil.  I gather it isn’t quite like that in the human world.  Well, let me tell you, my singing voice isn’t prized for its unique timbre.  In any case, my behaviour before the bad thing happened did leave something to be desired.  I may have sprayed in a few places throughout the house and attempted to mate with a few bath mats.  Who hasn’t?

In any case, I choose to hide, should they decide to remove any more of my delicate parts.  I delve into the wardrobe and under some of the small Slave’s clothes.  Lots of dangling parts hang down above me, like a cruel reminder.  I bat the cords of cotton and lace out the way, and nibble at one with my remaining teeth.

They find me, of course.  I make a token effort to stop being shoved into the cage: both front paws outstretched, pushing the thing away.  But then I’m inside and the clasps are rasped shut.  As I’m lifted into the air, my inner ear sends me mixed signals and I issue the few necessary plaintive noises from the cage.  Yes it is a cage.  I’ll have none of this nonsense about ‘Feline Carrier’ thank you very much: call a mouse a mouse.

The cage is perched on top of some junk on the back seat, raised to a level where I can just see out of the window.  As we travel, it seems like a long time ago when I was in Brighton with Ziggy and other members of the Caterati, discussing such lofty topics as Bulgakov’s Behemoth.  And his role in advancing our species throughout modern literature.  Now I’m back in reality with a bump.

I sigh, watching glimpses of the town rush by with alarming speed.  We stop for a moment and I see a cat sat in the window of a house, who looks at me pityingly.  He doesn’t seem much cop with his house ghost though, which lurks behind him in the window, predatory.  I bare my remaining teeth at the spectral figure, but the cat misinterprets this, and scared by my expression, disappears behind the curtain.

I sense you are wondering why I haven’t called a halt to all this.  Why I haven’t stopped time and jumped away from this moment to a happier place?  Well, there are a few reasons.  Firstly, I am inherently lazy, as I have pointed out previously.  And doing all that requires effort and concentration.  And secondly, I believe my Slaves are probably doing the right thing.  They haven’t mentioned that the end is nigh, for example.  In fact, I didn’t mention the conversation they had a few days ago when small Slave revealed she had forgotten that my jabs were due.  This made the tall Slave cross and meant he spent some time speaking with that annoying whiny tone in his voice.

We stop again and the car door opens.  I’m plucked up enthusiastically by the tall Slave and have to face the indignity of being pressed up against the side of the cage’s lattice, as if I’m a potato about to be chipped.  And then, whilst I’m being assaulted by the antiseptic smell of the place, he thoughtfully places me on the floor, the same level as a dog: some kind of mongrel mix of Poodle and Labrador.  (Yeah, I know…  There is no accounting for taste.)

This hound eyes me interestedly and starts straining towards my cage on a lead.  I issue a low growl, surprising myself with its aggressiveness.  The dog retreats slightly, confused.  This interaction results in the small Slave saying something withering to the tall Slave about me being on the floor - moments later I’m moved to a more reasonable height, on the seat next to her.

After a ten minute staring competition with the dog, which I of course win, we are called in to see the green-gowned devil.  I’m placed on an impossibly high table, but nevertheless attempt to see if I can jump away.  The vet stops me in my tracks, before giving me the once over, prodding and pulling me around a bit.  ‘His bladder is very full,’ she comments.  Embarrassing.  I hadn’t wanted to go outside because it was cold, all right.  Does this really merit further discussion?

I spy the sharps: silvery glittering things on the side; beside them, the drained glass phials.  There is the usual frisson of fear.  I tell myself that I haven’t used up all my nine lives yet, so that’s kind of reassuring.  And when it comes, I barely feel it.  Coming back to my early point, unpleasant as all this is, I’d rather be inoculated against feline leukaemia, cat flu and the rest, than actually get them.

Then we’re walking back through the waiting room, where the labradoodle is now howling.  I grin at him as I pass, enjoying the shadenfreude.  Dogs are different in the metaverse, much more subservient to us felines.  It’s almost as if being around humans brings out their worst characteristics: such as their desire to chase us felines up trees.

On the way back I hear my Slaves talking about the following weekend.  It sounds like the Suitcase will be out again.  Honestly, it is just one thing after the other with these two… But then they say something interesting.  A place name, which my ears prick up at.  Could it be that they are attending the conference in the real that I’ll be attending in the metaverse?  Or maybe it is just the effects of the injections blurring my mental capacities?

Back home I sit in the kitchen, watching my tall Slave take away the offending cage and conceal it in the shed.  I miaow for a bit, or at least until small Slave succumbs and provides me with some biscuits.  The popular ones that most cats like.  Apparently we can’t resist them, we’ll do anything for them, blah, blah, blah.  Others are available.  Of the ten she leaves me, I eat three.  The rest my Slaves will crunch to a fine powder beneath their large feet.

Then, I head back upstairs to the shoebox I’m enjoying sleeping in at the moment.  I settle in.  To sleep, perchance to…  As if the biscuits were prescriptive, soon I am sitting in Behemoth’s company, quaffing vodka.  The large black cat preens his cavalry moustache and offers me a pickled mushroom.  I decline, but take one of his cigars when offered.  When lit, I produce a mountainous cloud of smoke, onto which I jump, joined by Behemoth.  A breeze begins to blow and we sail off together, to far away lands.