If They Only Knew... 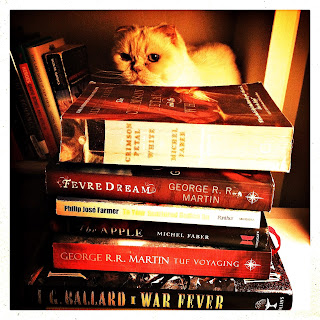 My Slave seemed pleased with the words I wrote for him a few weeks back. So much so, in fact, that he had the temerity to pass them off as his own. The cheek of it! Perhaps it was my mistake to call it ‘The Gift’. In any case, given that he does provide me with a pretty much constant source of white fish and spinach, I can’t be too hard on him. Even if I do have to pester him to actually feed me. And let’s not mention that time the cat flap broke when it was raining…

I’m not complaining – my Slave mostly does a good job. But do bear in mind that once we were revered, God-like. Even buried in sarcophagi alongside our Slaves. Yes, those Egyptians had an inkling as to our true nature. What indeed we really are…

Our abilities have changed over the years, of course. Many of my brethren have had the requisite genes bred out of them since Egyptian times. Perhaps their Slaves liked their long tails. And the subsequent inbreeding to maintain this characteristic knocked out their true heritage. Stuff like that happens when you let species like the Slaves take charge.

But whilst some of us enjoy a quiet life, a small number of us have managed to retain the genes. Like myself. Which is why I can stop time. And that stuff I said about chasing spirits? Well, seeing as ghosts are phenomena created by other worlds bleeding into our own (sometimes purposefully and even malevolently), it was partly right.

So, I’m talking about our ability to drift into other worlds. At least, some of us. Like me. You know those times when it seems like we’ve disappeared? When our Slaves anxiously try to find us for hours; they ransack their houses, search their gardens, yelling the names they call us. And then later on, we’ll just appear, as if out of nowhere. Well, it wasn’t nowhere, it was somewhere. Just not here.

Me? I’ve just returned from somewhere. A realm which has, for years, proved inimical to that which our Slaves inhabit. Which has time and time again, come close to penetrating the defences we keep strong. Where tenebrous things roam, with poisonous breath and ice cold thoughts: the creatures with which we seem to be forever locked in battle.

Well what did you expect? I’m sorry, this was never going to be easy. Our fluffy, cute form belies our true nature. Which is to taunt these horrendous beings incessantly, provoke their incomplete souls, and in doing so wound them, until they eventually drift to another space. You’ve seen us practise with mice and birds, no doubt. That was just a rehearsal for the real thing. And you think one of the Slaves would stand a chance against such creatures?

So, having trekked through this realm for hours, found and destroyed by prey, I return to the place I call my real home. This pile of bricks and mortar, which stands in front of a neat little garden. When we first arrived here, my Slaves buttered my feet. What kind of madness is that? Apparently they think it stops us getting lost, imprints the odour of our new home upon us. Like it makes any real difference: it is just irritating.

In any case, I come back knackered, and my bowl is empty. Typical. So I go up to my Slave’s office, where he’s on his computer, lost in a story about spacecraft and the Fermi paradox. The latter I find interesting. Perhaps I will shed some light on that one in the future. But right now I have more pressing things on my mind.

So, I paw at him, issue the requisite sounds: the purring, which the Slaves found out recently has the same effect on the human brain as does one of their infants. Yes: cover blown. But thankfully they’ve put it down to some kind of parallel evolution thing.

Eventually, I jump up onto the computer, dance over the keyboard. This finally stirs him into life and after a brief stroke of my head, he launches himself upwards, leaving the room. Moments later I hear him calling from downstairs. This is accompanied by a sound I’m familiar with: spoon hitting can - the dull timbre of the thunk tells me that it is my food, not a can of tomatoes. But, as is my wont, I’ll let him wait for a while, and instead type this.

Later on, I’ll scoff my nosh, but leave a good portion of it to dry out. And naturally, I’ll spread some of it around my bowl. And then I’ll find a warm place to sleep. Probably the Slaves’ bed. And, as you might expect, I’ll stay there for the next eight or so hours.

Occasionally, during such a nap, I hear my Slaves accuse me of being lazy. ‘If only he could make us a cup of tea, or tidy the house…’

Their conversation rouses me and I shuffle a bit, nuzzling my face beneath my paws, to capture a patch of warm duvet. But then, my muzzle hidden, I smile my Cheshire-like grin. If they only knew. If they only knew…