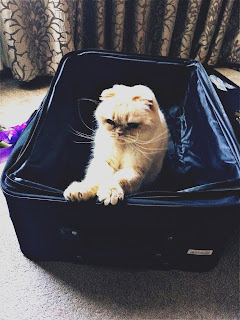 What the…? I look at the suitcase in the centre of the room. It is open, empty. But its reappearance can only herald one thing: my Slaves are due to depart.

I sniff the suitcase, imagining where it has been. Mostly I’m pissed off that they can do this to me: leave me here. Did they never consider that I too might like to lie on the beaches of Costa del wherever? Look at me – I’m even wearing my summer coat! Did they really not notice my casual moulting? I thought I made it obvious when I slept on the pile of newly laundered black T-shirts.

Now, my current Slaves seem like a good lot. But having been left on my own forever by previous Slaves, I still have a vague uncertainty about whether or not these ones will return. In any case, the suitcase’s presence means I’ll be left in the house alone, with no company for Bastet knows how long. (Bastet is regarded by some felines as a deity - do excuse me for lapsing into cat vernacular.) I mean, the cat sitter is all right, but she is never here for long. And she simply isn’t as good with the brush. Not only that, but she will insist on taking a daily photograph for my holidaying Slaves - I usually give her my grumpy face for such a snap.

I sit and scratch my ear. A few clods of fur come away in my claws: still moulting then. In which case, there is only one thing for it. I rest my front paws on the flank of the suitcase, judge the distance for a moment, and then jump in. It takes me a while to settle, shedding fur into the plush interior: its netted surface, the way it hangs like a hammock reminds me of my radiator bed.

I’m woken a few hours later by the Slaves busying around, opening up and closing drawers. The tall Slave has lost something which he deems essential for their break away, without which, from his plaintive tones, the entire holiday will be ruined. Eventually, I’m noticed in the suitcase and plucked up like a plush toy. I issue my own plaintive noise and am placed delicately on the eiderdown in the bedroom next door.

‘I think he wanted to come with us.’
‘Look at the mess he’s left. Hair everywhere, mud from his paws.’
‘At least he didn’t piss in it.’
‘Like Aslan.’

They are referencing a friend’s animal, not the lion in the C. S. Lewis books. Just so you know. I hear about Aslan a lot. His behaviour strikes me as slightly uncouth. I won’t dwell on this, but suffice it so say he certainly doesn’t live up to his name, nor is any way allegorical of a divine entity like the literary Aslan. Surprised I know about Lewis are you? Well, you shouldn’t be.

You should have surmised by now that my writing skills are somewhat preternatural for a so-called feline? Well, that’s pretty much what I’ll be doing when the Slaves are off. Writing about what happens in those spirit worlds I told you about before. It suits me well - I’m not so good at plotting, but then again all I need to do is write down what happens. And the rest of the time I’ll spend reading and sleeping, of course.

The Slaves wake up early. Me, I’ve been up for hours. The ghost from next door bled into our house, so I had to show it who was boss. It tries its luck occasionally, insinuating its way through the Victorian mortar. Most tiresome.

While they are fussing about, I do my best to get in their way. I sit at the top of the stairs, until one of them nearly trips over me. I scratch my post on the landing while the tall Slave tries to lug the now heavily laden suitcase past. And then, when it seems they are done, I hide from them under the clothes’ rail.

Good, I think. I’m glad they feel some kind of remorse.

‘I feel bad. Where is he?’ I hear my name being called. But I ignore it.

And then I hear the diesel grumble of a taxi outside. They both say goodbye to me, shouting it up the staircase into the aether, before the door closes. I wait for a few moments: on occasions they’ve run back in again at this juncture, having forgotten something important. But this time there is no such reprise. The silence, after the chaos of the past hour, is somewhat deafening. I stretch my legs, before heading to the computer. Where I pad in some words. Then, after spending some time sprinting up and down the stairs, for no particular reason, other than to check that they haven’t left the loft door open, I return to the eiderdown.

The next few weeks will pass slowly. I’ll keep one ear half-cocked, as I wait to hear the return of the taxi. Knowing that when it comes back, I have to position myself at the top of the stairs, pretending that I’ve been waiting there for my Slaves to return. They seem to like that. But when they do return, I’ll ignore them for a few days: the cold shoulder treatment. Which will, I know, pay dividends: more biscuits and, of course, my favourite food.