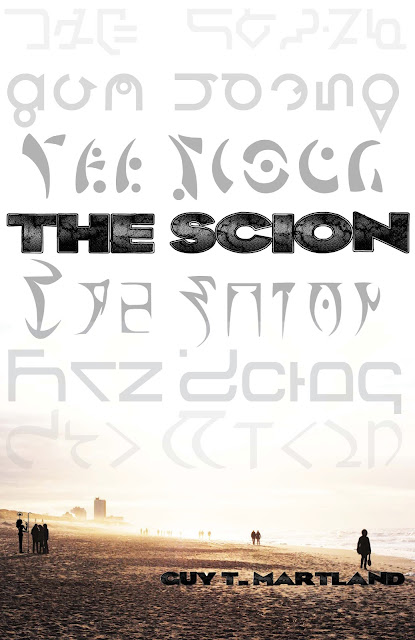 Sometimes a picture can tell a thousand words.  So said a Japanese philosopher, whose name has been lost in the vagaries of time.  Not quite 112,000, or thereabouts.  Unless it's Picasso's 'Guernica' or maybe the Bayeux tapestry.  In which case...

Anyway, cut to the chase: the cover for my Space Opera novel 'The Scion' was revealed this week!  And, you know, I think it hits the spot.  The novel starts on a beach (sorry, prologue haters).  Figures are converging to face an oncoming alien threat in unison.  The skies are filled with a skein of creatures, fast approaching over the water.  Then... to put it simply, things don't go too well.  The title font on the cover is meant to symbolise the clouds of these aliens, the Wraith, approaching.  And the other fonts spell the same but in other texts.  I'm not going to plot spoil, but there are other alien species involved, not just murderous, apocalyptic ones.  (Big shout out to those involved in the cover design.)

If you like the sound of all this, the book will be published on the 1st July.  There'll be some kind of Blog Tour as well, around this time.  And I'm planning on Betelgeuse to go nova in celebration.  The celestial clock is ticking - look up and watch the stars!

With the Cover Reveal came the blurb, which you can read over at Safkhet Publishing.  But I've included it here as well, just for the hell of it:

The aliens from your nightmares are coming. The colonies of Earth are next. And it looks like nothing can stop them.

A blue star, a dying friend, a kidnap and the dusty contents of an old room: Septimus Esterhazy's life is about to change. As he blows cobwebs from the manual of an old spacecraft, hidden for decades, a Pandora's box creaks open.

Little does he know that the universe's very nature is being threatened by a powerful alien race. Nor does he know that he is somehow involved with why the Wraith, destroyers of worlds, are coming.
The self-proclaimed 'Protectors of the Known Universe', the Sassrit, are trying to do everything they can to thwart a Wraith attack. But time is running out and resources are stretched.

A Sassrit agent, one of the shapeshifting Jarthiala, is recruited to help. The path he follows leads to the doorstep of a planet called D, an Earth colony, above which a blue star hangs, its light reflected in the eyes of Septimus below.

This is a journey which will change Septimus Esterhazy forever. It will make him question his nature. He will uncover secrets about his family that have lain dormant for years. And it will test the loyalty of those closest to him.

But first he has to watch his best friend die.