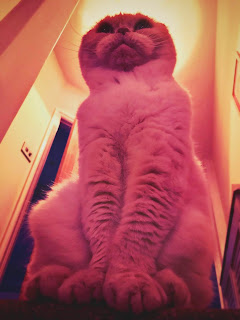 It was Beast’s going away party. We were giving him a good send off in The Cricketer’s, or at least trying to. Things had unfortunately got a bit out of hand, probably because of Beast’s decision to lay on a few free churns of fermented milk. As a consequence, most of the felines present were in their cups, sloshing around pints of Friesian Export. There’d already been a stand off between two Tomcats over a female in heat, which had meant the security dog asking them both to leave. And now one of the cats, a member of the Caterati called Fungus, was on the bar itself, singing, or at least attempting to.


A few other cats were dangling from the curtains or curtain poles, bodies contorted as they balanced both themselves and their pints of the white stuff. The poor St Bernard’s Lily in the corner of the room had been appropriated as a toilet and seemed to be wilting as a result. And one feline was up in a light fitting on the wall, cosily curled around the bulb’s warmth, oblivious to the fact that its fur was beginning to smoulder.


‘I’m really sorry you’re going, Beast,’ I vaguely remember saying. I'm not exactly sure when; perhaps we’d been talking for a while. You shouldn’t really rely on my unreliable narration. In any case, we were tucked away in a dark and quiet corner, trying to ignore the madness around us.


‘You should come too…,’ Beast replied, his pupils large in the gloom.


‘Come too? Me?’ I asked in disbelief. Primarily because I hadn’t considered this as an option.


‘Yes. Come with me! Why not? Leave your Human Slaves behind,’ he urged.


This wasn’t some lame excuse, but the truth. My novel Shadow Murder had broken all records and I was writing a sequel, called, at that point in time Shadow Murder 2. As many of you know, this became Diamond Claw, and what follows gives some insight into why. Anyway, I’d managed to procure an agent through the success of Shadow Murder, and he’d been encouraging me to do all kinds of literary things, some of which were out of my comfort zone. I don’t mean anything weird, just having to spend time travelling the portals, doing readings and interviews and so on - the front end of my craft, which allows me to spend the rest of the time hermit-like, curled up in the top of the house with my typewriter, dreaming up stories.


‘Mr Big time, eh?’ said Beast, with a somewhat uncharacteristic snarl, baring his chipped incisors. Thankfully this aggressive expression broke into one of irony, the more characteristic Beast reappearing. ‘Well, never mind. No harm in asking, is there,’ he said, taking a draught, then pawing the milk away from his whiskers.


‘To tell you the truth, I’m not sure I’d have the bottle for it,’ I replied. ‘I’m sure I’d be more of a hindrance. I’m useless at jumping, for example. I haven’t caught my own food in years. At least, not in anger, not without invoking The Architect.’


Beast thought about this before replying. ‘Maybe you're right. We each have our places in these worlds. Yours is staying at home in Bournemouth, writing all those stories. I couldn’t do that – I don’t have the stamina to sit down and write for hours like you do.’


‘Do you think you’ll ever come back?’ I asked, my ears flicking backwards because of the awful racket Fungus was making.


‘Who knows? That’s what I’m going to find out. Maybe if I do, you can write about it.’


Fungus chose at this point to fall over, sending an avalanche of vitric receptacles careening down the wooden bar top. The sound of shattering glass seemed to resonate around the place for a while. And it was at this point that the Mice Police arrived.


The Mice in this world, in this verse of space, or whatever you wish to call it, are somewhat different from what you know in your human frame of reference. For a start, they are heavily armed. You could say quite ridiculously so. And, whilst still smaller than a cat, they are larger than a human might expect a mouse to be. Much of this is down to their enhanced musculature and cybernetic skeleton. But the rare unenhanced versions I’ve had the pleasure of meeting aren’t much smaller. And another thing – they absolutely detest us. So you can imagine what happened when four of the heavily armed Mice Police came in to restore order.


Now, cats are good at bolting. Most got out of there before the shots went off. Before trigger happy Officer Vasman got a bit busy with his new toy. A few old lags, high on the effects of the white stuff and god knows what else, decided to have it out with the MPs. Which went down like a pile of excrement, and not one which had been delicately covered by soil to preserve one’s dignity. When the MPs had finished with those lags, they weren’t even fit for taxidermy – they were laced with so many holes that the stuffing would fall straight out.


Beast and I dashed across the streets of Brighton, the other cats scattering into the darkness. Behind us the report of another of Vasman’s rounds rang out. We plunged past the bars and restaurants, shimmering with the ghosts of human existence, and then into the maze of the lanes. I trailed behind Beast, as we twisted and turned through the serried ranks of second hand book shops, record stores, antiques centres and artisan boutiques. I noticed that Shadow Murder was for sale in the windowfront of one as we skipped past, but didn’t stop to look.


Beast slowed and drew to a halt in the North Lanes, where the metageography of our world and that usually occupied by humans begins to diverge. Where their shops and restaurants exist, in our world this part of the town has fallen into abeyance. Some areas are similar, limned by the smokelike impression of the other, but most are ramshackle, fallen to ruin. Within this mess of fallen masonry lay the mystic path: the ancient portal which wound a unique course through the multiverse in the heart of the old lanes. Nobody knew where it went, and it was said that no-one who had used it had ever returned. It lay at the back of a building which in human space was a flea market, so around us shimmered the ghostly outline of human detritus, cast offs: some worthless, some priceless.


‘Here it is, the so-called path of the Mystics.’


‘But… You are going now?’ I asked, out of breath after the sprint.


‘Well, seems like a good time. The party’s over, after all.’


‘I just… didn’t imagine it would be so quick. I thought maybe you’d hang around for a few days, say goodbye to everyone properly.’


‘I’ve said my goodbyes. And this is my final one,’ he said, holding out a paw.


Somewhat stunned, I paused for a moment. One of his claws had been replaced by a curved shard of diamond, which jutted out slightly. He’d told me about this once, how he’d lost the claw in a fight, and how it hadn’t grown back - which had necessitated the implant which now glinted at me in the night. I found myself suddenly wondering about the stories he held which he hadn’t given up so easily. And the stories which I would no longer hear repeated after the third pint.


I held out mine in return and our paw pads touched.


‘I’ll look for you in the shadows, in the space beyond,’ I said.


‘You really aren’t coming back are you?’ I asked, doleful.


Beast cocked his head, looked at me with eyes half closed. ‘Look, your books are going well. But sooner or later, you’re going to need some new material aren’t you? And when that happens, I’ll find you.’


And then he turned on his pads, and into the dark space beyond. For a moment, the human world seemed to bleed in strongly, and his outline was lost behind a blur of old Star Wars toys and OO gauge railway models. I squinted into the dark, thought I saw him once more: a speck of grey against the blackened bones of the building, but then he was gone.


As I turned back, my paws felt heavy, leaden. I started nosing my way to one of the conventional portals in the town, but couldn’t concentrate, and kept losing myself in the web of streets. As I wondered if I would ever see my friend again, I felt a wave of melancholy flow over me. Eventually I found myself walking past the onions of the Pavilion, the gardens of which were now filled with the casualties of the night, the outcasts from the pubs and Nepeta dens.


Just as I began to wonder about the likelihood of Officer Vasman appearing again, I heard the sound of gunfire. I looked around, panicking.


‘Quick, this way,’ something whispered: a voice familiar to me. I caught the shadow of a cat and sprinted after it. I followed its tail as it swished through the streets, the sensation oddly similar to that an hour or so earlier. And then I was back in the place it had all started that evening: the alleyway next to The Cricketers’.


I had a strong feeling that it had to have been him, that some tendrils of the space he now inhabited were leaching out to mine. I looked around, but the tail had now gone. However, the melancholy I’d felt earlier had also vanished, as if it too had passed into a separate portal. And I became convinced, although I’m not sure why, that I’d see my friend again.


I turned to the metaverse and spoke: ‘Thanks, Beast.’ And then I stepped through the portal, back home to where I would spin new worlds of my own into existence. Fashioning portals from the words, which I hope have just transported you there and back again.