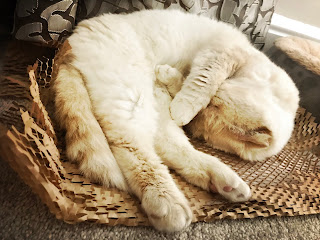 I think my Slaves are learning. When I sit by the door and miaow – this doesn’t necessarily mean I want to go out. There is a cat flap I could use if I want, so it is quite unnecessary them opening the door. Although sometimes I like to be pandered for in this way. And when you feed me, don’t expect me to eat what you’ve left immediately, if at all. And similarly with my cat basket – just because you’ve cleaned it, doesn’t mean I want to sleep in it. In fact, I’d much rather sleep on the discarded packaging for the Tall Slave’s vinyl records. When he’s received such items, he has now learnt to place this wrapping next to my basket.

What does this all boil down to? Well, we like to have the choice. We will not be dictated to by our humans. You are our Slaves, it is us who dictate to you. The sooner you all realise this, the better.

Such quotidian misinterpretations are one thing, frustrating as it may be for us. But it is another thing when we want to convince our Slaves of something really important. It was attempting to relay such information to a sister cat's Slaves which led to the ideas in my first bestseller, The Shadow Murder. Or Shadow Murder as it became, because my agent insisted that the definite article was unnecessary, portentous even.


The idea came from an event I attended not long after I’d met The Architect. Dutifully following his recommendations, I’d tried to speak to the Rock Star Cat, but hadn’t got anywhere. I rarely leave the walls of the castle provided by my Slaves – it is simply too much hassle to try and jump onto walls and fences. But I was younger then, and more energetic, so would occasionally wander along the fences, walls and alleyways to the garden a few doors down. She was never there. Or else she was, and the Rock Star himself was also present, roaming between his studio and the house, carrying guitars or wires or an errant cymbal. And generally making a racket, which scared me off.


So, The Architect suggested that instead I go to Catbury. A big festival not too far away, where Rock Star Cat was billed to be playing. It was a mere skip and a hop from the portal. In fact, Catbury is where a lot of portals converge. Some suggest this is because of its spiritual nature, as a place where many ancient paths cross. There are even rumours that some of the portals from there will lead to mystical places, from which there is no return. So, there were lots of hippy cats hanging around - lots of catnip openly doing the rounds, outwith the usual nepeta dens.


Ziggy, my usual partner in crime these days, hadn’t been born at this point. Back then my usual go to buddy was a friend called Beast. Now, what goes on with humans when they come to naming us is sometimes beyond me. In any case, having suffered a number of inappropriate sobriquets, most of which can’t possibly be written here, Beast just seemed to stick. He was from Devon and specialised in history from the 5th century: our wildcat, lynx ancestors and so on. And given Catbury’s connections to the mystical cats of old, this was right up his street. Beast was a tough, green-eyed and grey-coated creature, one ear ravaged from a fight which he claimed to have won.


So there we were, wandering from tent to tent, slowly getting mellow on pints of the white stuff. It was a summer afternoon that seemed to stretch out forever. We caught a few caterwaulers on stage, bought some sardines from a stall and then spent way too long in the biscuit tent, sampling various items. And of course, around us spun the familiar penumbral web of humans, at a similar festival in their world.


We were quenching our thirst in the Real Milk bar when I first noticed something strange. I can’t recall what I was drinking, but Beast was on the Goat, something called Anglo-Nubian. Living up to his name, that chap would drink anything.


‘Did you know that in the 5th century, if a Slave dreamed about a cat, it was a sign of a good harvest to come. We were worshipped, and well looked after. None of this house cat nonsense, in the olden days cats were proper cats…’ As Beast was talking, I found myself watching the shadows. When it first happened, I looked at my drink suspiciously. Could it be laced with some kind of catnip, I wondered. Then it happened again.


The humans were moving through a similar tent to ours. But there was one particular human who was passing through the crowd, his movements fast and sleek. As I watched, he removed various wallets and purses from the pockets of the surrounding revellers and then walked off with them.


‘Did you see that?’ I asked, interrupting Beast’s monologue about Sidhe, the legendary cat which apparently stole human souls from their deity. Like we don’t have better things to do. ‘Did you see it?’ I asked again, finally grabbing his attention.


Beast managed to summon up some focus to engage with the shadow world and saw exactly what I saw. ‘No way!’ he exclaimed. And soon we were off, weaving through the crowd, following the thief to see where he went. Beast managed to engage some of the surrounding festival goers, and soon we had an artist cat on hand, drawing the larcenous human’s features onto a piece of vellum. We followed him all the way to the exit, watching him jump over the fence and out of the festival.


‘Has anybody recognised their Slaves in the shadow world? Anyone’s Slaves at the festival in the other place?’ Beast asked the now dispersing crowd. He seemed to have shrugged off his previous inebriation and was fully engaged with the process. No-one spoke, but this didn’t stop him and he vanished for a time, on his quest to find some connection between what was happening here and there.


I thought I’d lost him, and ended up trudging across the vale of Kellas alone. I saw Rock Star cat performing – she was a magical stage presence, and I stood entranced. But I didn’t get a chance to speak to her. And when her set ended, she was escorted off stage, surrounded by a number of security hounds.


‘Maybe we should have got VIP tickets,’ said a voice next to me. Beast was back.


‘My thoughts exactly. At this rate, I’ll never get to speak to her.’


‘Well, we could always take on those security hounds…,’ Beast replied in a show of bravado.


I shook my head. ‘Not the best way to ingratiate oneself. Anyway, did you find anyone?’


But of course, when Flamingo tried to pass the message on to her Slaves, it proved harder than expected. She left the picture around the house. But her Slaves just looked confused, didn’t understand where it had come from. Eventually, the picture was circulated more widely amongst the feline community and a week or so later, a cat on the thief’s street recognised the perpetrator. The evidence from the festival had long gone, but a bunch of moggies broke in and found a new stash of credit cards at the perp’s apartment. They bundled these together with some paperwork containing his address and posted this through the letterbox of the local police station. And he was finally caught because of this ‘anonymous tip off’.


Witnessing a crime in the shadow world got me wondering. People often ask me where my ideas come from, as a writer. I used to say that I was handed down a book full of ideas from my great-great-great grandfather. Then, later on, I told them that I used to go on a pilgrimage to the idea tree in distant Tibet. But I eventually realised that my readers didn’t appreciate such facetious behaviour.


So there we have it. The idea tree, the book of ideas, can sometimes be found in real life. In this case, it was at a festival in Catbury. Or perhaps it was the catnip laced milk. In any case, it is one thing having the idea, and another putting it into practice. And then further, like the cat trying to tell his Slaves something, making it convincing. Therein lies the true art.


Back to The Cat's Page 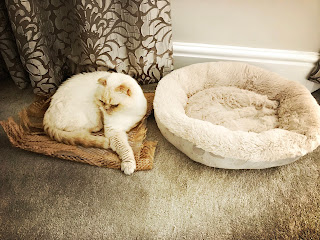