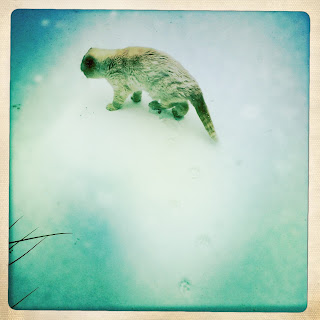 The Slaves have returned. And it now seems as if they are intent on torturing me.

From my curled position on the bedspread, I first hear the plug clunking into the socket. And then, the lion tamer's crack of the cable being unwound. I wait in anticipation, hearing the characteristic rattle of the thing’s plastic casters; maybe the Slaves are just moving it. But I can’t relax now, having heard all these danger sounds. My nictitating membrane peels back and I’m peeking out of my half-closed left eye. Then I hear a click and the characteristic dull groan as my nightmare wheezes into life.

I spring up and dart away from the dragon-like machine, seeking immediate shelter wherever I can – the closest sanctuary being under the bed. The beast roars around me, causing me to scuttle further into the darkness. I am cowering, surrounded by lint and fluff. It is almost like another world down here. Nearby an old book, its pages curled with age, is so coated with dust it looks like it has grown a layer of fungus. A rogue cup also lurks nearby, lying on its side, and in the gloom it reminds me of an empty eye socket: the eyeless skull of a spirit. I bat it away with one paw and as it rolls out of sight, it raises a small cloud of particles. I sneeze.

I track the hoover’s progress around the bedstead, waiting for the moment. For your information, I am fully aware that hoover is a type of vacuum-cleaner, a trade name if you like. But the bisyllabic nature of the word ‘hoover’ is easier. I don’t want to dwell on the damn word any longer than I have to. And their prevalence means you know exactly to what I refer. In any case, my Slaves have something they call a Dyson, which is equally horrendous.

You may ask the question: how can a cat who spends much of its life fighting ghosts or spirits be scared of a hoover? Well, it is like this: some Slaves have an unusual reaction to certain sounds. For example, the sound of a metallic brush being scraped down a blackboard. Or some other dreadfully high-pitched noise. It is kind of like that for us felines.

Did you heard about the Slave who wrote that symphony? The one for vacuum cleaners and floor polishers? To be played with a full orchestra? This isn’t any kind of joke, but the truth. The Slave who wrote that awful piece must have been a cat hater. Probably in league with some evil spirit, which slipped into him while he slept.

The hoover moves away from the door and I detect an opening. Gunning my eleven year old limbs in a preternatural show of strength, I aim at the doorway and make it, before charging downstairs, taking the steps three at a time. I blur past the other Slave in the kitchen, where she is checking her phone. I sense some movement: did she look up? Perhaps she registered the click as the cat flap opens.

And then I’m outside. But wait, what the heck is this? I paw at the ground tentatively. The white stuff which covers the surfaces is soft to the touch, but cold. But then uncertain, I turn back, looking at the fresh tracks left in the snow. I turn to sniff them – yep definitely me. But overall, the layer of cold white stuff isn’t that pleasant. What is the meaning of this? Snow in March?

I ponder global warming for a moment. The carbon footprint built up by the travel of my food across the various countries of Europe. My succulent chicken and beef meals, none of which originate from the country in which I live. My Slaves spoil me, but it is easier. I’m really not much of a hunter in the real world – can’t remember when I last caught a mouse. Let alone a bird (I’m not including the time lapses I’ve previously mentioned, because that was cheating. And also the energy expended in doing so usually outweighs the effort).

As if answering my thoughts, a robin appears and perches on top of the fence. It looks at me, askance, as if wary of what will happen next. To allay the threat of my presence, it flaps its wings and puffs out its red breast. It really needn’t bother. But I look at it with interest, noticing that somewhere at the back of my mind, genes are shouting at me to pounce. If I wanted to I could stop time and pluck him off his perch and he wouldn’t even notice – but I don’t: these days I know better.

The bird eventually flies off and I’m back to thinking about global warming. The consequences. We will likely survive if we can’t obtain our tinned morsels. But if food does dry up, our numbers might be diminished. Or we’d have to revert to our hunting roots. Some believe because of this, we won’t be able to keep as many spirits from the world. Heck, some believe that global warming doesn’t exist at all. In any case, I think the Slaves will continue to look after us, perhaps, as in some cases I’ve heard of, even at the expense of their fellow Slaves.

I slide into the undergrowth. Sniffing for a good spot. Snow falls onto my back and I shake it off, irritated. And then… I begin to dig. Hey – some privacy here! How rude! Come back next week, and I’ll tell you about what I found out about the Slaves’ holiday then. In the meantime, I am closing the metaphorical door on this post.