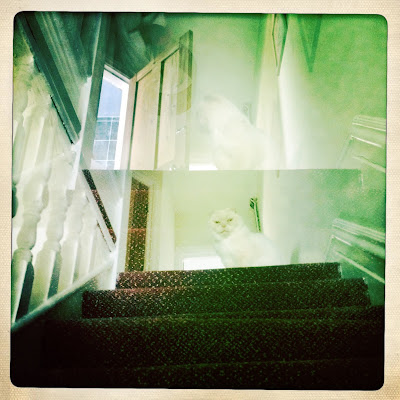 More words from the cat, channelled by Guy T. Martland.


There is a strange human in the house and I hate him.

This human is working for my Slaves, replacing the front door. Which means he has been disturbing me all day with a variety of frightful noises. Just as I get to sleep, there is some new insult to deal with - some new cacophony of intermittent bangs, crashes and sawing. Frankly, I’d rather listen to a hoover symphony. And not only that but he is using some kind of noxious smelling substance which makes my eyes water.

Worse still, strange human is impeding my access to both my food and the outside of my Empire. I’d prefer not to get anywhere near to this creature with his drills and hammers, for starters. But his boxes and pieces of wood clutter the hallway, making it look like some kind of military obstacle course. (There was once a cat military, back when we were at war with the mice police…)

Instead, I am sitting at the top of the stairs, watching the human. In my most menacing manner, of course. He looks up at me every now and then, sometimes even says my name. The impostor. Strange human isn’t one of my Slaves - he can’t use my name with such impunity.

I wonder about stopping time, so I can slip out. But I’m lazy – put it down to my age. And that is too much effort right now. Instead I lie down, curl my feet over the edge of the top step, and yawn.

A while later, I hear a different noise, one I vaguely recognise: the tap of a spoon on china. It snaps me out of a reverie. The strange human is in the kitchen making a hot drink: here’s my opportunity. I take the steps two at a time and make for the open front door. I stop at the precipice, sniffing the curled wood shaves at the bottom of the empty frame. Something tickles my nose and I sneeze. The strange human doesn’t notice. It sounds like he’s having a conversation on his phone.

I’m not usually allowed out of the front door. There is a road and my Slaves worry about me getting flattened. So I take it cautiously, slipping under the strange human’s van, surrounded by odours of rust and oil. I poke my head from under the front axle and slip onto the pavement, heading down towards the smell of the sea. An open top bus groans past, a child on the upper deck pointing at me.

I pass the old lady’s house, which smells of dust. My neighbour cat used to live here, but we didn’t get on very well. He kept trying to climb over the fence to say hello, which was annoying, so I had to scare him off. Tall slave helped once, when he was proving incredibly obnoxious. Anyway, neighbour cat died a few years ago.

Next up there is a hedge. I stop to sniff at that, recognising the earthy scent of a local fox. I trace that along the base of the hedge, until I reach the front of another house. A patch of sun lies in a nearby flower border. So I decide to lie in that for a while, my bed a cushion of lotuses and crocuses, and then sleep catches up with me.

When I wake, I sniff the air. It smells like rain. I wonder if the strange human has finished, whether my Slaves will return. I hope they haven’t gone to Birmingham again. It turned out that they were at some conference, SpaceCon, the tall Slave reading that story ‘The Gift’, which I … gifted him. Our writing lives seem perilously close to colliding. Perhaps one day they will.

I stand up and stretch, decided to head back home. Except, at first I can’t recognise this side of the house. There is a scent trail of course, which I follow. And then I see the new door, which is now installed and closed. There is no sign of my Slaves.

I wander up the street a bit further, but it begins to rain. I shelter under a tree, and then a bush. The rain begins to soak into my fur, and I start to shiver. When the rain eases off I venture out again onto the black metallic pavement. At this moment, I feel hands around me and I’m launched upwards. I recognise her smell before I start to struggle: my Slave.

‘What are you doing out here?’ she asks and utters my name a few times. I don’t usually like being picked up, but I let it go this once. She carries me back to the house, past the funny smelling new door and back home.

Soon I’m on the sofa, curled into a ball. I pick my head up when tall Slave then appears. But then, after a few words with the smaller Slave, tall Slave says that platitude: Curiosity et cetera. I thought better of him.