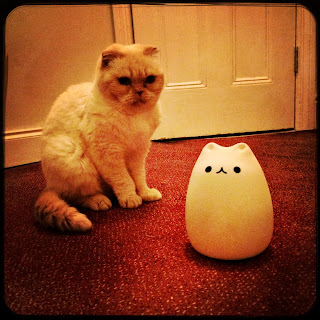 This one is for Ziggy's Slave.

It is the thick of night.  The spirits are quiet, as I’d hoped for.  The effort I spent scratching my claws against the surface of reality over the past week seems to have done the trick.  The ghost from next door is blissfully absent.  Which is all just as well, as I have somewhere to be.

I check on my Slaves, but they are both fast asleep.  The tall one is snoring.  I think he had a few pints of beer last night.  I reach up and pat his face – no response.  The smaller Slave would sleep through an earthquake.  They certainly aren’t going to notice me sneaking out.

I pause at the bottom of the stairs, remembering the strange human who had been replacing the front door.  I was worried he’d accidentally disrupt the portal, but everything seems to be working.  And my Slaves seem happy with their new door.  Although, as I sniff it again, I’m still not certain whether it was indeed painted in Farrow and Ball, as my Slaves had instructed.

I pass through the portal and then I’m in a dark side street, lit only by a slice of moon.  But I know where I’m going.  Human smells drift through: the strong whiff of takeaway and tang of urine.  The lane leads onto a larger thoroughfare, where I can see humans walking around.  But they don’t see me as I dart through the shadows.

Soon I’m at The Cricketers, the dog doorman bowing as I enter.  I resist the hardwired instinct to bash him on the nose with a paw and continue inside.  The place is crowded, but I see Ziggy, who has snagged a table by the fireplace.  I raise a paw and push through the mat of fur and claws, jump up onto the leather seat opposite my friend.


‘I’m good thanks,’ he replies, raising an almost full glass of the white stuff.

Then I’m back at the bar, wondering what to have.  I go for the Jersey.  The fat tabby at the bar pours me a half.  As he’s doing so, I look around to see if there is anyone else here I recognise.  Of course I can see the shadows of humans, as their universe blurs into ours.  They pass through me like ghosts as they queue for the bar in their alternative world.  And that is essentially what they are here, ghosts - beings from another universe bleeding into this one.  Humans can’t see us so well, as they are less finely attuned to the vicissitudes of the metaverse as us felines.

It is said that this universe structure was passed on to the human author China Miéville by his cat, who came here to this very pub and observed the human world lying on top of ours.  His Slave subsequently wrote an award winning book about two cities lying on top of each other as a result.  And the cat dined out on that story until its dying day.  But that might of course be apocrypha.

‘How are you, Ziggy?’ I ask as I sit down, cleaning the milk from my whiskers.


‘I need some advice,’ he replies, straight to the point.


‘What have your Slaves done now?’

The topic of our Slaves comes up quite often in conversation, as you might expect.  In fact, this is why we met, because our Slaves were friends.  They also meet in this bar, The Cricketers, occasionally, but in their world not ours.

‘It isn’t my Slaves.  They seem to understand that I prefer the wet food to those biscuits now.’


‘Oh, good…,’ I reply, taking another draught of the Jersey.

Let me explain – Ziggy is relatively new on the scene.  But being a writer’s cat he also has a penchant with words.  It comes with the territory.  Anyway, he looks up to me, in my more mature years, as someone who could help refine his prose.  He explains the plot of one of his stories, which involves worlds lying on top of each other.  I remind him of Miéville’s cat.

‘But of course, I’m happy to have a look,’ I reply, wondering if I’ve accidentally snuffed out the burning candle of talent by suggesting that what he has written has been done before.  So much of everything is derivative after all…

Our conversation is interrupted by a ruckus at the bar.  Other cats are whispering and a few paws are lifted.  I crane upwards on my back legs for a better look.  A grey barn cat has walked in, sporting shades and a long black cloak.  I sit back down.

‘Gaiman’s cat has just walked in,’ I tell Ziggy.


‘Wow,’ Ziggy replies, also trying to get a glimpse.  But he looks conflicted.  Should he stay here with me or go and see if he can spend some time in the orbit of a more luminous member of the caterati.  He plumps for the cooler approach and stays where he is.

Gaiman’s cat moves on to another watering hole, as does the evening.  I pass up Ziggy’s offer to continue on to a Nepeta den.  I’m too old for that stuff.  Last time I tried catnip, I was asleep for about a week.  The spirits in the house had raised merry havoc while I was out of action.

So I bid my farewell, and head back to the alley, passing the shadowy ghost figures of two humans who appear to be locked in a quite intimate embrace.  And then the glittering lights of Brighton wink out, and I’m back in the pitch of the hallway.  The spirits remain at peace, so I creep back upstairs and jump onto the bed, curling up at my Slaves’ very real feet.