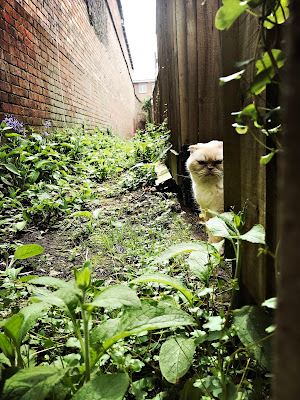 For those of you who don’t live in these parts, a chine is a sort of narrow wooded valley that descends to the beach. There are a number of such chines in these parts as well as over on the Island. Don’t ask me why humans call them chines – I have enough problems with the etymology of feline words to also worry about Human vocabulary. But if this continues to trouble you, I’d suggest a library or that screen thing to which you are probably at this moment glued.


Today, the paths that wind through the chines will no doubt be busy with Human traffic - it seems that Spring has launched its assault with a vengeance, finally banishing Winter once and for all. But, come nightfall the beach will empty and the Human Slaves will return to their houses to feed their beloved familiars. Who, it has to be said, are generally content to find a warm fire escape or patio stone to lie on – all this Human fuss about a beach!  And then later, it is time for The Architect, who steals around when the Human Slaves have gone to bed, when nocturnal creatures come out to play - when the chines come alive with a darker kind of life – which that night, as we pick up the threads of this story, included me.


It came as a relief that the fox kept the creatures of the chine at bay, snapping at their shadows. Not that I should have believed the stories – most of the tenebrous forms resolved into an occasional mouse or vole which crossed our path. I felt a frisson of fear as we encountered a badger - we stopped, wondering whether it would be interested in us, whether The Architect himself would have to stop time so we could escape. But its striped snout was too busy snuffling in the leaf mulch to pay us any attention, and it slunk away into the undergrowth.


After some time, we joined the chine’s central path, which descends slowly to the beach. Here strange creatures I now know to be called bats, flew around in the darkness, issuing high-pitched shrieks at each other. I tried to catch one until reprimanded by The Architect: ‘We’ve got a lot to do, no time for that…’  Then, we spent some time going up and down the various tributary roads which led into the chine. We passed dwellings where my colleagues share space with their respective Slaves; sometimes The Architect would stop and take more readings.


He’d mutter: ‘a few seconds,’ or ‘nearly half a minute,’ before placing the twine delicately in his bag. None of the readings were as long as the Rock Star cat’s, whose transgressions seemed wild by comparison. As he worked, I would occasionally help, holding the thread while he cut it with his incisors. This process went on for some time, and it wasn’t until the faint blush of a new day was spreading over the heavens that The Architect finally seemed happy, an almost Cheshire-like grin spreading over his features.


‘And now we must head to the calculating machine,’ he offered, before I could say anything. We wound back into the chine, following it down towards the smell of the sea, until we came across a suspension bridge which hung perilously above, joining the sides of the valley together. This structure seemed dizzyingly high – I wouldn’t have trusted myself to land on my four feet from that height.


‘The machine is beneath one of the lower stanchions,’ The Architect replied, ignoring my sarcasm as he dismounted and whispered something I didn’t catch to the fox. I also jumped off and followed his bulk up the sheer slope. The Architect moved spryly, despite his size, and I found myself short of breath with the climb. It was then that The Architect seemed to disappear, vanishing from existence. I moved toward the space he had occupied moments before, and then my surroundings also changed. At the same time, the smell of the chine’s scrub also seemed to have been removed from the air, replaced by a dank, dark odour, tinged with something metallic.


As my eyes caught up with my nose, I realised we were both stood in a small cave, the centre of which was occupied by an old dented matt grey structure, which looked a bit like a tin drum on legs. From one side a rotary handle jutted outwards, attached by a complicated but beautifully designed web of burnished black steel.


‘This is the Machine,’ The Architect said, quite unnecessarily.


‘It doesn’t look much like a bridge,’ I replied.


The Architect ignored me and instead began to slide back the bolts on the side of the machine opposite to the handle. Once released, the panel on this side hinged open to reveal a complicated series of cogs inside. The Architect then reached into his bag and began pulling out the threads, attaching them carefully to the mechanism’s innards, creating an intricate webbed pattern. I remained silent until this was done, until the bag was empty, and the door once again closed.


‘I’ll let you turn the wheel,’ The Architect said, gesturing with a paw at the handle. ‘Widdershins,’ he added.


‘What is–,’I began, but The Architect interrupted.


‘Get on with it! Haven’t you wasted enough time?’ he asked, a wry smile on his face.


I began to turn the handle anti-clockwise as directed. This was hard at first, as there was a lot of tension within the device, but then as I turned more and more, it became easier. I continued this process until The Architect signalled me to stop. Then I watched as the other side of the machine was once again unbolted, the door hinged open. Where had been a tangle of woollen threads, attached at various sites, there was now a pristine ball of wool. The Architect pulled this out and threw it to me.


‘It worked,’ he said. ‘If you get a ball of wool, like this, then time has all gone back to normal. If you get a series of tangled knots, then you have to start all over again.’


I looked at the ball of wool, impressed. ‘But what if you stop time for hours?’


I nodded. I had indeed and it never seemed to work. There was always a snag and you’d pop back into reality.


‘No,’ The Architect replied. ‘But now you understand why what you can do is a privilege. Why there are consequences to stopping time. Someone has to pick up the pieces, make sure the timeline is stabilised. And that person is me.’


‘I’ll bear this in mind,’ I replied, wishing that I didn’t sound so much like a kitten that had been scolded.


‘And if you could find a way to have a word with the Rock Star cat… I’ve tried. And I’ll keep trying, but you know, maybe being a neighbour…’


‘My words would have more effect?’


And that was the night I met The Architect. Of course, I still see him around. But my deviations of the timeline are much less pronounced that they used to be. And did I get to chat to the Rock Star cat? Well, perhaps I’ll tell you that story another day. I’d suggest you come back next week, but that is entirely up to you. If instead you have found a lovely patch of sun in which to bask, or a newly laundered pile of shirts on which to lie, then I’ll totally understand.