The Architect (Part One) 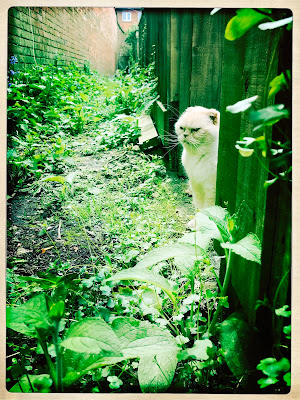 At the convention a few weeks ago, I attended a panel on Worldbuilding. This got me thinking. I’m assuming my missives are mostly received by humans. And of course, our world is as alien to them as their world is to us. As odd as this might be to me, I suppose I have to do a bit more to explain my domain. So that the humans reading this can suspend their disbelief.  Even though this is the real thing for us felines. And if we didn’t believe in it…


I suppose, it is like you humans trying to explain your world to us. Total fantasy, that kind of mundane existence, if you ask me. That the realm you inhabit doesn’t really contain portals to alternate universes, that the properties of time can’t be distorted, that Einstein wasn’t wrong (up to a point). And about time...


I first met The Architect in the garden next door. This was a few summers back now. My tall Slave had got into the habit of leaving the Narnia door open for me throughout the day, and one night he’d forgotten to close it. So there I was, sniffing around, enjoying the rebellious thrill of roaming the prohibited land in darkness. When, of course, everything changes.


I felt the presence of this creature before I smelt him. Hackles raised, my tail whipping upwards, I felt my torso expand to twice its usual size. Or at least, this is what I imagined. I turned to where the scent originated: two green spots of light eyed me impassively across the paving stones. I felt the beginnings of a growl catch at the back of my throat.


‘There’s really no need for that,’ the cat said, its voice a deep basso. ‘I’m not here to do you any harm.’


‘I have many names. Some people call me The Architect. Others The Mechanic. The latter is perhaps more accurate, but less popular.’


The cat then moved into a patch of moonlight, revealing its large torso. He was a black-coated creature, his size and weight impressive. His stature was such that it reminded me more of a small staffordshire terrier than a cat. I felt myself backing away instinctively, it now evident that I would come off worse if it came to a scrap. I’m a writer – not a fighter!


‘Unprecedented activity. I thought we should have a chat,’ The Architect spoke, his deep voice accented with a gentle burr. From the Wessex inflection, it was clear that he was from around these parts.


‘Unprecedented what?’ I asked, still feeling slightly angered that this creature was on my territory and seemed to be calling the shots.


‘It has been drawn to my attention that you have been experimenting with stopping the clock?’


‘Well, the thing is, all time must be accounted for.  You are a writer aren’t you?’


I nodded in response, and settled down on my hindquarters. Although with tension in my legs, ready to spring at any minute.


‘You know, I do like reading your stuff. Even if it is a bit human-centred for my liking. But you writer-folk are all the same. Need to be pulled back into line every now and then.’


‘I’m not saying you shouldn’t. But… well, everything in moderation. How about you accompany me on my evening rounds? It might help you understand.’


‘And how are we going to get out of this garden? The walls are too high. And in case you hadn’t noticed, I really am not the sort to go jumping around.’


‘I have a solution to that. But first, I must take some measurements.’


I watched as The Architect pulled out a ball of black wool, and held it up to the night with his two front paws, spooling out a certain amount. As he sat there, his posture reminded me of a small bear, although his movements were graceful and purposeful. When he’d measured enough thread, he opened his mouth and with a razor sharp incisor, cut it neatly. He then placed the strand of wool and the ball in a leather satchel, which he pulled over his shoulder.


‘Are you ready to depart?’ he asked. But before I’d answered, he issued a sharp shriek. Moments later, I was assaulted by the scent of fox, as one snuck over the fence and lay down on the ground next to The Architect. I’d been near foxes before, but never this close. Usually they ran away when they saw me, as I brandished my claws. What was strange though was how the creature had hardly made a sound as it passed through the foliage and hit the deck. Almost as if it had the ability to dampen the sounds it created. Unlike during their mating season, when they seemed determined to make enough noise to wake the entire neighourhood.


In an eyeblink, The Architect had moved and was suddenly sitting astride this creature, holding a paw down to help me up. After a moment of hesitation, I joined him, clambering onto the fox’s back. And then we were off, this motley trio jumping over the wall of the garden and into the dark alleyway beyond.