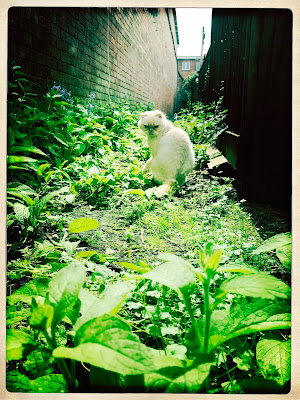 I apologise for leaving you hanging like that. I suppose I could put it down to pacing. Leaving the reader wanting more by engineering a break in the prose. By creating a wave like flow in the text, which ebbs and flows according to the moon-like gravities of the author’s thoughts. But in a natural fashion, not like the formulaic see-sawing and eventually just grating approach in ‘The Da Vinci Cats.’


As I said, I suppose I could put it down to pacing. But the truth of the matter is that I was distracted by a piece of paper. Something my Tall Slave left lying around. It wasn’t so much what was on the paper – that wasn’t important. More that the piece of paper was lying on the floor. Which gives me free reign to lie down on it. And worry its edges. I’m sure you understand, dear reader, why this was so important.


So, let’s get back to The Architect. Now, where were we?


The three of us, The Architect, myself and our trusty steed beneath, plunged into the darkness of the alleyway. Well, as we cats only need one sixth of the light humans need, it wasn’t that dark – but I was going for dramatic effect, there. Which I have now banjaxed. But I’ve been to enough critting courses by now to know it only takes one moment of inaccuracy such as that to interrupt the flow of prose. Such as I’m doing here.


Let’s begin again. The three of us, The Architect, myself and our trusty steed beneath, plunged into the dimly lit (but still relatively bright in the visible spectrum for a feline) alleyway. The alleyway leads along the back of the Victorian terrace, where my Slaves and I live. So I was relatively familiar with this part of my Empire, even under the cover of night.


But we continued onwards, over a brick wall into a series of interlinked gardens. Stationery cars were parked on driveways, made even more monstrous by the moonlight; some issued the tart smell of petrochemicals, whilst others smelt of their rubber tyres.


We passed through the ornate garden of our local celebrity Slave – the rock god who wrote that song about the Summertime. The Architect paused at this moment.


‘There’s a studio at the end of his garden. Musicians, like writers, keep odd hours.’


‘Well, you never know when creativity is going to hit,’ I replied, instantly regretting this platitude. And it isn’t really what I believe in. As far as I’m concerned it, writing is mostly pure slog. It is my Tall Slave who believes in some kind of divine creative moment - I fear he will be waiting for some time.


‘Well, seems like nothing is hitting the spot at the moment,’ the Architect replied. We moved across the grass, padding around a rather obscene water feature – from a human perspective that is. We paused near the gurgling fountain as The Architect hopped off the fox’s back and took another reading. I could smell the scent of a female feline in the air.


‘Rock Star cat,’ The Architect explained, noticing I was sniffing, gauging the nature of the odour. ‘Acts a bit too much like her Slave. We’ve had words,’ he added, as he spooled out a measure of wool. The length of this cut seemed considerable compared to that taken from my environs.


The Architect turned and pinned me with his green eyes. ‘Because she has stopped time more than you today,’ The Architect answered, his tone suggesting I was a bit of a dolt for not surmising this earlier. I nodded in response, and suppressed the desire to cuff him one around the maw.

We then continued down the centre of the street, venturing further than I had before. When it came to the main road, The Architect drew the fox to a sharp standstill, listening carefully. And then we were off, scrambling into the remains of a famous Slave’s old house. The place is called Skerryvore and is just ruined walls, with a model statue of something called a lighthouse at the end. That lighthouse marked the start of our passage onwards into the chine - a place which I had always assumed to be the province of monsters, from where cats generally did not return.
‘Don’t believe the tales,’ The Architect said, as if sensing my fear. But by then, it was already too late.